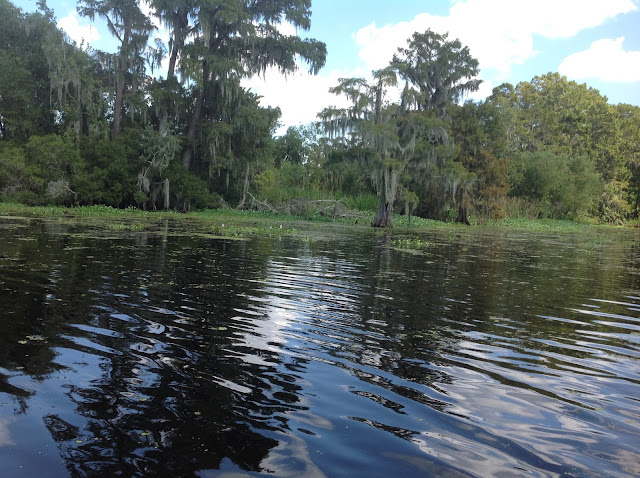 ‘Born Under A Bad Sign’, the unmistakable Albert King riff wafting out of the bar I was walking towards on Natchez Street. I was setting out early for a night of bingeing on music and had only turned the corner from the St James’ Hotel. New Orleans is a remarkable place and as every hour passed my wonderment only increased. As a kid I remember Elvis singing ‘New Orleans’ in his film King Creole. Freddie Cannon’s ‘Way Down Yonder In New Orleans’ and particularly a big favourite of mine to this day, Bern Elliott and the Fenmen’s version of ‘New Orleans’ - not to be confused with the Elvis song, different completely. Now I’m not trying to claim that from an early age I was impressed or infatuated with this city. But there was something exotic sounding and mysterious about it. Anyway, I couldn’t resist going in to this bar. A trio were playing, the main man a singer/guitarist, must have been around sixty odd, belting out this great blues song. The bar wasn’t that full but it turned out that the band had been playing for nearly two hours at this point. Quarter of an later they were packing up! Well it was a good taster for the night at least. With that I continued in the direction of Bourbon Street, Surely one of the most famous streets in America, along with Beale Street, Memphis. Well from a music point of view it is! 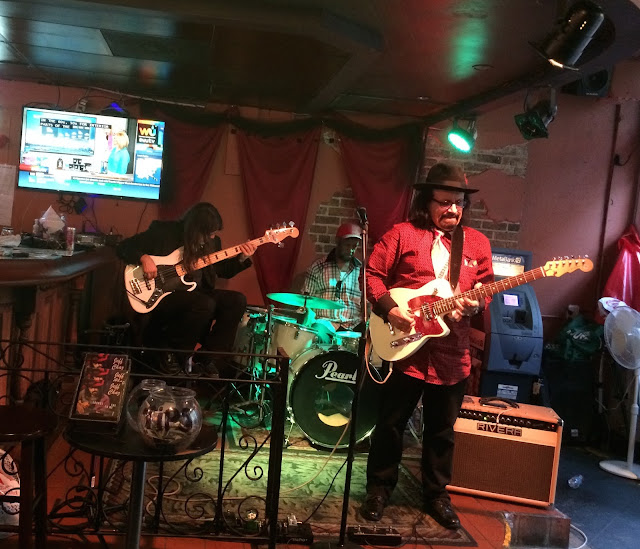 Bourbon Street in the French Quarter is a must place to visit. Its a bit like Covent Garden, street entertainers everywhere. Outside one bar I was in a young guy was haunched over some pots and pans and buckets, banging away like he was Buddy Rich. Can’t say it was brilliant to be honest, after ten minutes it was getting on my tits. But he was getting some dollars from passers by.

I called in at a bar where a band was playing Creedence Clearwater and Bruce Springsteen. Perched on a stage high above a bar, The Hangovers they were called. Just as I was enjoying it, they finished for a break! Still, as I sat there pondering my next move, a side door opened to a connecting room and lo and behold, another band was playing. Great stuff. I went through and it was a Cajun band, magic. A big guy sat there on a chair in his shorts playing the fiddle and singing in that French style, reminiscent of the the soundtrack of Southern Comfort. One of my favourite all time films, set in Louisiana. The fiddler was accompanied by an accordionist, bass player and drummer. The backdrop to the stage was of a Louisiana swamp complete with alligators. A couple of pints and I moved on after an hour. Right opposite was a bar with a soul band on stage belting out Wilson Pickett, Sam and Dave. Unbelievable. And the bar was completely empty! Amazing. Much as I regretted having to leave them too it, next bar had another soul band and was packed. Talk about competition! This nine piece were crammed on stage overlooking the crowd and it was The Commitments all over again. Sitting at the bar I was amazed watching the punters buying drinks. It seemed or I suppose it is the custom to drop the bartenders a tip with every round you buy. It looked natural, almost nonchalant. Not for me though. I worked behind the bar for years in Corby and you would get plenty of drinks bought you, but money? These people were getting their change and slipping a dollar or two back onto the counter as if they were shedding peanuts. And they were accepted with not as much as thank you. Different world… 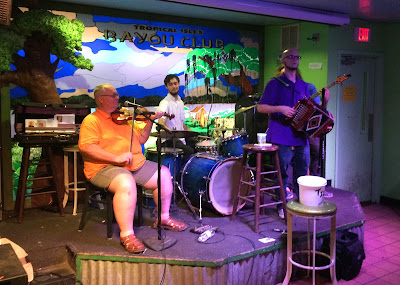 Time was getting on and I was getting hungry. Everywhere looked packed out. I decided to make my way back towards Canal Street to the Crescent City bar. On the corner of a junction on Bourbon Street three policemen on horses stood there, doing nothing in particular. Just observing. What cracked me up was one copper sitting atop of his mule looking and texting somebody on his mobile. Like he was sitting bored in a bar or something. Funny.
Walking towards the main street where the Crescent City bar was, there was a bit of a commotion going on. Flashing blue lights by a set of traffic lights. People were stopping and watching what was going on. I paused, a guy was leaning over a railing smoking a cigarette. Taking in the scene. A cop car had chased this car down the street, stopped him and the two police got out, guns ready. The feller in the front car stepped out, held his hands up. The police checked him out, frisking him. at this point this character in front of me turned and said; “they got him!” I said somewhat surprised; “ yeah, er, I can see that”
“They were chasing him, he was smoking a joint out of his window”
“Right” I said, not knowing what to add.
“They got him” he repeated.
“He’s had it”.
Ok, well after this riveting bit of conversation I moved on and left him to spectate. Thing was, it was like an episode out of a TV film or something. Weird. You dont get this in Corby I mused.
The Crescent Bar was packed as all the bars were but I sat at the bar right next to a jazz trio. Lovely and calm after the earlier rumbustious sort of bars I had ventured into. I ordered a cajun dish and chilled, reflecting on the sights I had seen on this trip this past week. From Memphis; Beale Street, BB King’s Bar, Graceland, Sun and Stax Studios, the Hi Tone Bar where Gareth’s band The Victims had played. New Orleans and the Steamboat trip on the Mississippi, Bourbon Street, the bars. I was feeling quite exhausted, tired but thrilled. 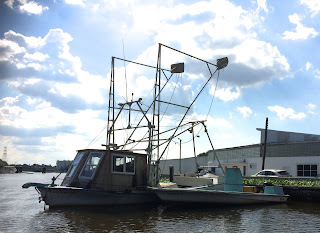 Next day I was booked on a Swamp trip to the Bayou. Has to be done. ‘Born On The Bayou’ a Creedence Clearwater song came to my mind. ‘B’ side of ‘Proud Mary’. A bus took us a few miles out of the city, over the famous New Orleans Bridge. We arrived at a shack where our boat awaited us. Looked like the boat in the film ‘Jaws’. A dozen or so of us boarded. The driver or captain was an entertainer himself. suppose he has to be but he was full of stories and bullshit. Great guide he was. The trip lasted around two hours, the captain stopped the boat and fed a few alligators with marshmallows. Surprising to say the least. How did he know the gators liked cakes? The guy never shut up, taking the piss out of a couple of punters he had obviously singled out for some fun. I kept my head down! It was a great laugh though and the stooges responded accordingly. Soon we were back and heading back to the Big Easy. 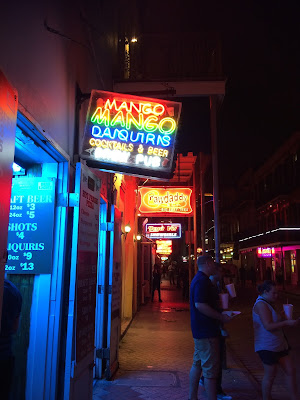 I spent a few hours buying T-Shirts and souvenirs, a pork pie hat. I went back to the Cajun Bar also. Different outfit this time but next door The `Hangovers were playing again.
Perched on a stool I was alarmed for a minute when the barman started ringing a bell loudly and vigourously, blowing a whistle for all his worth simultaneously. 'What's going on?' Couldn't have been 'last orders' but then he stopped and everything calmed down again. And the band played on, never stopped actually through this racket!
Suddenly, two couples came in, stood at the bar and ordered two beers and two cocktails, called Shark Attacks. The barman went mad again! Ringing his bell, whistling.. ah I got it! Cracked up when the penny dropped! Shark Attack! Get out of the water! Haha well who thought that one up!

This week had been rather hectic, taking everything in but I had enjoyed every minute of it. Being on one’s own wasn’t a problem. Can please yourself but I do have to admit that likewise it would have been nice to have had some company… but I’m used to it now. Only downer of the week was the flight home. I had a crap seat on the plane and was knackered and uncomfortable the whole eight hour night flight. But, I will go back to New Orleans again some time, fingers crossed.
Posted by Clive Smith at 05:13 No comments: Links to this post