New York, New York, so good they named it …. 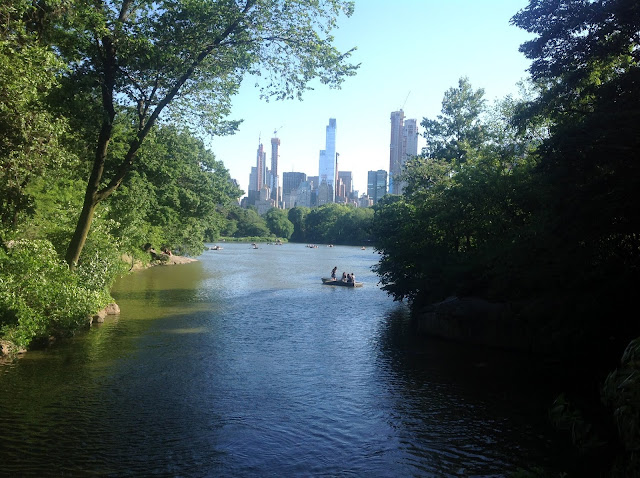 New York, New York, so good they named it ….

A city everyone says you have to visit. So it’s the first stop on a trip that will also take in Detroit and Chicago. I left home at 5.30am on June 12th 2018 for the drive to Heathrow. Plenty of time thought I. Surely at this time of the morning.. and all was going well until I hit the M1 and even worse the M25. Which reminded me of why they call this stretch of motorway the biggest car park in Britain! Interminable. Took me 3 hours! Luckily I had plenty of time but it was still a nightmare.
Hot and bothered, never mind tired, confusion set in as I finally approached the Purple Parking car park, a ten minute courtesy ride from Terminal 5.
Trying to pay attention to my sat-nav after turning off the M4 I missed the turn off at a roundabout, went round twice, cut some bloke up that was ungraciously greeted with a blast of his horn before getting on the right road. Then I drove into the Premier Inn Hotel next door to the car park. Clear as mud I said to myself, frustrated. Exiting the Premier after taking advice off a taxi driver I eventually arrived at my destination. I had made it. Dropped the car off and hopped on the awaiting bus.

Thursday 14th June
Greenwich Village has fascinated me for years. Situated in the Lower Manhattan district of New York the Village was the epicentre of the Beat culture during the 50s and 60s. The bohemian capital it has been called. Woody Guthrie, Pete Seeger, Bob Dylan, Jack Kerouac, Allen Ginsberg, William Burroughs all passed through this pocket of New York City. Like saving the best until last, I set off to walk, all the way down 8th Avenue, which according to my map, I would then take a turning left, then right and into Washington Square, the gateway to Greenwich.
Temperature was well into the 30s, 9.30 in the morning and as I found, New York was bustling, people going about their business in every direction. On my way I passed one of the world’s legendary venues, Madison Square Garden. I was surprised how small it seemed, from the street anyway. You have these preconceived ideas and images about certain landmarks and buildings. Was this where all those great boxing fights involving  Joe Louis, Rocky Marciano, Muhammed Ali took place? Where The Beatles, Elvis played? Well as it turned out, it is and it isn’t. This is the third MSG, as they refer to it nowadays. All built on the same site. It’s more relevant to note that this is where George Harrison held his Concert for Bangladesh in 1971, John Lennon played his final gig as a guest for Elton John in 1979, Elvis played here in the early 70s. It’s now better known as a sports arena, home to the New York Knicks Basketball team.
An hour later, and I’m finally coming towards the end of 8th Avenue, feeling dehydrated, looking for my left turn which was Greenwich Avenue.  I walked another mile and found on the corner of 6th Avenue and West 8th Street, Jefferson Market Garden, with refreshments available from mobile street vendors. I took advantage and sat on a bench in the shelter sipping a nice cool Apple juice, watching the world go by, as you do. A few elderly gentlemen chatting away, Simon and Garfunkel’s ‘Old Friends’ from their album ‘Bookends’ came to mind. Young women with their babies in pushchairs taking a breather, street cleaners gathering up items of garbage. Sat there for about half hour, enjoying the rest and relative tranquility. Time to move, another glance at my map and I headed off down West 8th Street towards 5th Avenue which should take me right into Washington Square, the Village!
It had taken a while, but eventually there right in front of me, at last, was the Washington Square archway.
Research tells me that the arch was built in 1892. It celebrates the centennial of George Washington's inauguration as President of the United States in 1789 and forms the grand southern terminus of Fifth Avenue. Who said ‘you learn something everyday?’
The arch stands at the front of the Square where in the 60s buskers, poets, street entertainers congregated on Sunday afternoons to revel in communal spirit, play their instruments, get drunk, get stoned, sing folk songs. The scene grew until it got too intense for the NYPD. The chief of police, in his wisdom, decided they couldn’t be doing with people having too much fun and sent his force down to stop the singing and disperse the crowd. Riots ensued as the revellers cried for ‘freedom for speech and freedom to sing in America’. Many were arrested by the heavy handed police, thrown into the back of ‘meat wagons’. It’s all on film. And this is where it happened in 1961.

Digesting this I moved on towards MacDougall Street where I was pleasantly surprised to find immediately, the famous Cafe Wha. Animals bass guitarist Chas Chandler discovered Hendrix here in 66’, Dylan and his cohorts were regulars here before him. Disappointingly it was closed but it was still midday. Getting hungry I walked around and came across an inviting looking bar called The Lantern which was just opening. They had the opening ceremony of the World Cup on their television as well. Perched on a bar stool for a couple of beers, ordered a cracking Mexican Fajita meal and watched the Russia v Saudi Arabia game. It was lovely and cool as well. Outside, the temperature was well up, exhausting. Another hour of walking around MacDougall and Bleecker Street, buying a couple of t-shirts, checking out record and book shops, in which I bought two, and I made my way back, deciding that the last night in NYC would be spent down here in the Village. A pit stop for a refreshing beer on the way back to my hotel was opposite a fire station. And lo and behold, they were called out while I was sitting there gazing out of the window. Impressive and once again my thoughts turned to 9/11. These guys or their predecessors would have been involved. What must have they been thinking as they raced to the scene of the Twin Towers? What must it have been like to be standing around here going about your everyday business and watching in horror as those twin towers disintegrated before your eyes? God only knows. Terrifying.

The Village was swarming tonight. I went looking for The Bitter End in Bleecker Street. Joan Baez, Joni Mitchell, Dylan, Jackson Browne, just a few of the thousands of artists who’ve played there. To hot to go in, there didn’t appear to be much action going on either, I called into Willie’s Bar next door which was air conditioned, colourful and quirky. Signs and anecdotes, cartoons adorning the walls and ceiling. Some good music being played on the system too. From ‘Willie’s’ I headed back to MacDougall Street to seek out where the once famous bar The Gaslight was. This was another regular haunt for Dylan and the folkies. Closed in 1971 it is now a tattoo shop.
MacDougall was thronging with people, bars were rammed but the one right opposite where the Gaslight used to be,  The Four Faced Bar, had an unoccupied round table near the doorway. Got myself a beer and settled down at the table to take in the buzz. A couple came in, looking for a table, glanced around and were deciding to move on until I told them that the two stools next to me were free. They looked relieved, thankful for some respite. ‘No problem” I said, ‘Take em’. Russell and Kerry had just arrived that day from Canada and were originally from Sydney, Australia. Russell was on the same trek as myself, searching out the Dylan and other famous haunts. ‘Massive fan’ Kerry said, nodding at Russell. We discussed various things about Dave Van Ronk, the Clancy Brothers, Ramblin’ Jack Elliott, the 60s, knowledgable he was too. Ramblin’ Jack is still around, aged 85 and still playing. Pity he wasn’t around here tonight. That would have been something. Being cocky, I admit, I asked Russell if he had found The Gaslight yet. He looked at me hopefully, obviously hoping I would enlighten him. I pointed out of the window. ‘Right there’ I said. They looked out at across the street. ‘Where?’ Russell asked. ‘The tattoo shop’. They looked gobsmacked. ‘I checked it out earlier’ I told them. ‘It was number 116’. They looked as disappointed at what I had been. It was nice meeting them and chatting away. Total strangers but its always interesting to discover other people’s backgrounds, outlooks, history. I left them to it and moved on to take in another couple of bars, soaking up the atmosphere and thrill of being in this place. A feeling I had when I went to San Fransisco some ten years before. I had achieved my goal for New York. Next time I’ll get round to visiting other landmarks and venues I didn’t make this time. Even a show, but I reckon you’d need more than three nights to achieve everything.